I had eagerly anticipated Michael Cinco’s show from the moment I knew I would be at Fashion Forward. I am a huge fan of his work, his ability to work with miles of lace, acrylic and crystals and transform them into works of art without any element of tackiness amazed me. Every piece was so beautiful It felt like a dream and although he was given the longest runway available…I wished it was longer! 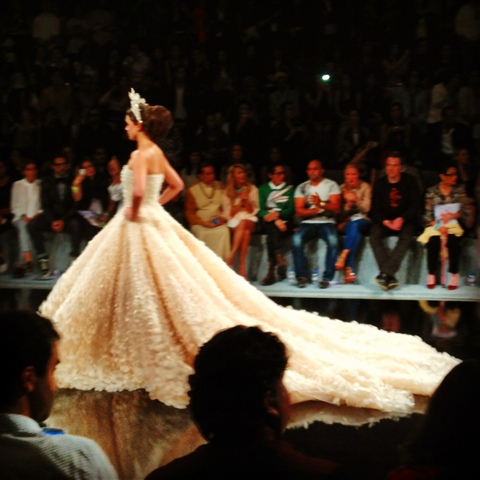 So far Fashion Forward had been a civilised affair, I watched the pouting fashionistas animatedly discussing there favourite pieces with the odd rolling of eyes and pointing at the extroverts….part and parcel of being at a fashion event but nothing could prepare me for what this overly composed crowd were about to display. I could see the queue (or should I say herd) of people waiting to get into the show from the other hall and as I made my way there people were pushing as if Marilyn Monroe had just been resurrected in there! I stood calmly on the outside…not wanting to be crushed as a line of pouty girls holding hands pushed in front of me. They carried on pushing till they reached the front and I saw a few other groups doing the same. As much as I wanted to see the show I knew we would all get in eventually and didn’t wanna be squished at the front with the “poutys” so I stayed back and waited. A door opened and they surged forward but I heard security saying “media passes only” wooooooohoooooooo!! so I held mine up and walked past the “poutys” ….I might have pouted at them a little bit haha but yaaaaay I was in! 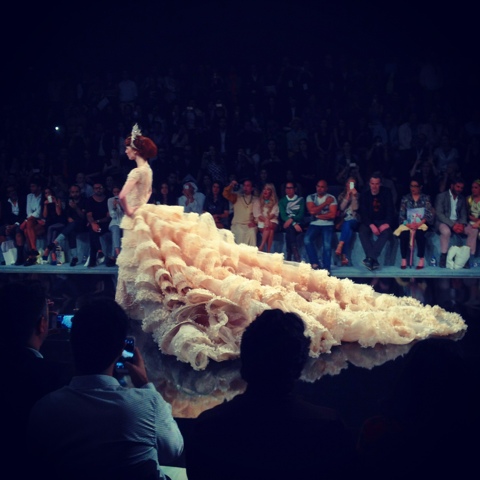 The show began with this beautifully haunting music and images on the screen that gave me goosebumps and under the dimmest light you could make out a few figures all in white. As the lights came up the dresses sparkled, they were embellished from head to toe on lace, all different lengths and cuts and finished with white Tiaras. The two floor length gowns were stunning and then the same set up followed but with black dresses and black tiaras and headpieces which looked amazing “It’s so Snow White and the Huntsmen” whispered my friend Zareen, I could definitely see it, it was so magical and fairy-tail like! They were equally beautiful and dazzling in the light and just when I thought it couldn’t get any better an amazing wedding dress came out followed by another with so many layered ruffles. The audience gasped and wowed at its immaculate detail and beautiful long train that the movement rippled through as she walked. A black and red gown followed, the red was striking against the monochrome theme and again the ruffles and sparkle and movement of the dress were breathtaking. 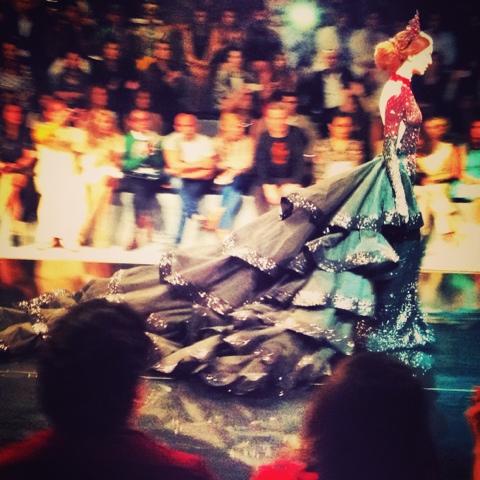 I was completely in awe of it all and the first one to stand up for Michael Cinco when he strutted out, such a visionary, definitely deserving of his standing ovation. He’s a Filipino designer based in Dubai who has been spotted on the likes of Naomi Campbell, Sofia Vergara, Jennifer Lopez and Tyra Banks and judging from this collection I’m sure that next awards season we will be seeing a lot of him on the red carpet!