The W-Hotel has landed in Dubai and we went down to try the new seafood restaurant called Sea-Me. It is a buffet style restaurant with the biggest spread of seafood that I have ever seen! Oyster Bar, Lobsters on ice, Scallops galore and the most delectable seafood Paella! 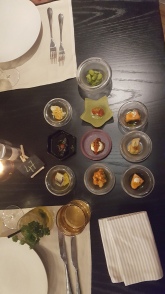 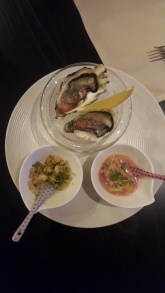 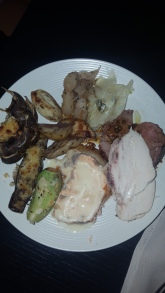 We began at the oyster bar with ceviche which is all served on a conveyor belt so it keeps coming! There is a pink coloured ceviche which was to die for, it was marinated in passion fruit juice and the combination was incredible, flavours I had never imagined together but they were perfect

I did try an oyster and the salsa they drizzle on is tasty but I am just not an oyster person, I don’t like the texture. There are some beautiful canapes in the fridge which were all delicious but my favourite were the scallops and salmon with caviar.

For mains we went to the cold food bar which had lobster, crab and various prawns. The king prawns and lobster with apple chunks were my favourite. It was all extremely fresh and chilled in ice. Then we went over to the hot food and tried the Paella and Lobster rice, the Lobster rice reminded me of one of my grandmas dishes, it was so comforting and homely. At the live cooking station I tried the fresh scallops, red mullet and red snapper, the snapper was under-seasoned and the red mullet was over cooked but the scallops were cooked to perfection.

The desserts were divine! The choux pastry puffs with chocolate were my favourite, they were like an explosion of happiness in your mouth and the ice cream station is fun as you can add your own toppings. The rest of the desserts weren’t amazing but that probably had something to do with the fact that I was bursting at the seams.

The buffet is priced at 295 and drinks are billed separately, I would 100% go back, it is hands down the best selection of seafood I have ever seen in Dubai and well worth your money!

There was an error retrieving images from Instagram. An attempt will be remade in a few minutes.